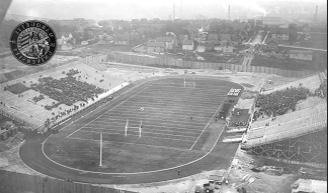 Growing up as a sports fanatic in Wisconsin, I always felt an attraction to old stadiums, baseball fields and gymnasiums that are littered across the state.

My brother-in-law worked at Marquette University and had access to two of the most electric sports venues I ever visited.

One chilly, overcast fall Saturday he drove me to old Marquette Stadium, where countless great athletic events took place over the years. Legendary football coach Bear Bryant brought his Kentucky team there one year. Mike Ditka played there against Marquette while in college. Jesse Owens and other track stars brought the stadium alive in their heyday.

But Marquette dropped its football program way back in 1960, and the stadium slowly deteriorated. Years and years later, after wandering around the hallways beneath, we climbed onto the crumbling concrete bleachers for a moment and gazed out across the overgrown field, surrounded by a running track that lost its battle to dandelions and other weeds.

The autumn wind blowing leaves from the maple and elm trees suddenly ceased, and complete silence overwhelmed me for a moment. We both felt an arctic crush cast upon us, as if the temperature dropped 30 degrees. Chills ran up my spine and I swear I could hear the roar of a raucous crowd.

After one of those moments that lasts seemingly forever, we looked at each other completely stunned, and both let out a blast of an exhale, unsure how long we had held our breath. Without  prompting, we both spun our heads to the far end of the homestretch, where runners would finish a race.

Wow, I thought, if these walls could talk.

Not long after that, we snuck into the old Marquette Gymnasium late one Friday night. My brother-in-law wanted to show me where my beloved Marquette basketball team of the Al McGuire years practiced. The aging hardwood court creaked as we walked across it led by flashlight to the center circle. There we simply stopped, and silently took it all in, admiring the hanging track that circled above us.

Just then we could hear the footsteps of a runner circling. We looked up and all around, and saw nothing. We did, however, leave in somewhat of a hurry.

Throughout small towns across the state there are old high school football fields and old city parks with small baseball stadiums. Every time I find one, I just sit in silence and let the ghosts of the past tell me their tales.

Are these places haunted, or am I just more than a pinch crazy?

I’m not one to answer that. All I do know that is back in 2004, Frontier Field in Rochester, NY was allegedly named as the first sport venue with confirmed evidence of paranormal activity.

As the story goes, ESPN reported that human remains were found when the stadium was built. A group of paranormal investigators apparently found evidence of a presence when they checked it out.

Read for yourself here. Then again, if you attempt to learn more by clicking on the links, you come up empty. The pages are no longer there. The real question is, were they ever there in the first place?

DO YOU KNOW OF A HAUNTED SPORTS VENUE? Share your story with us.