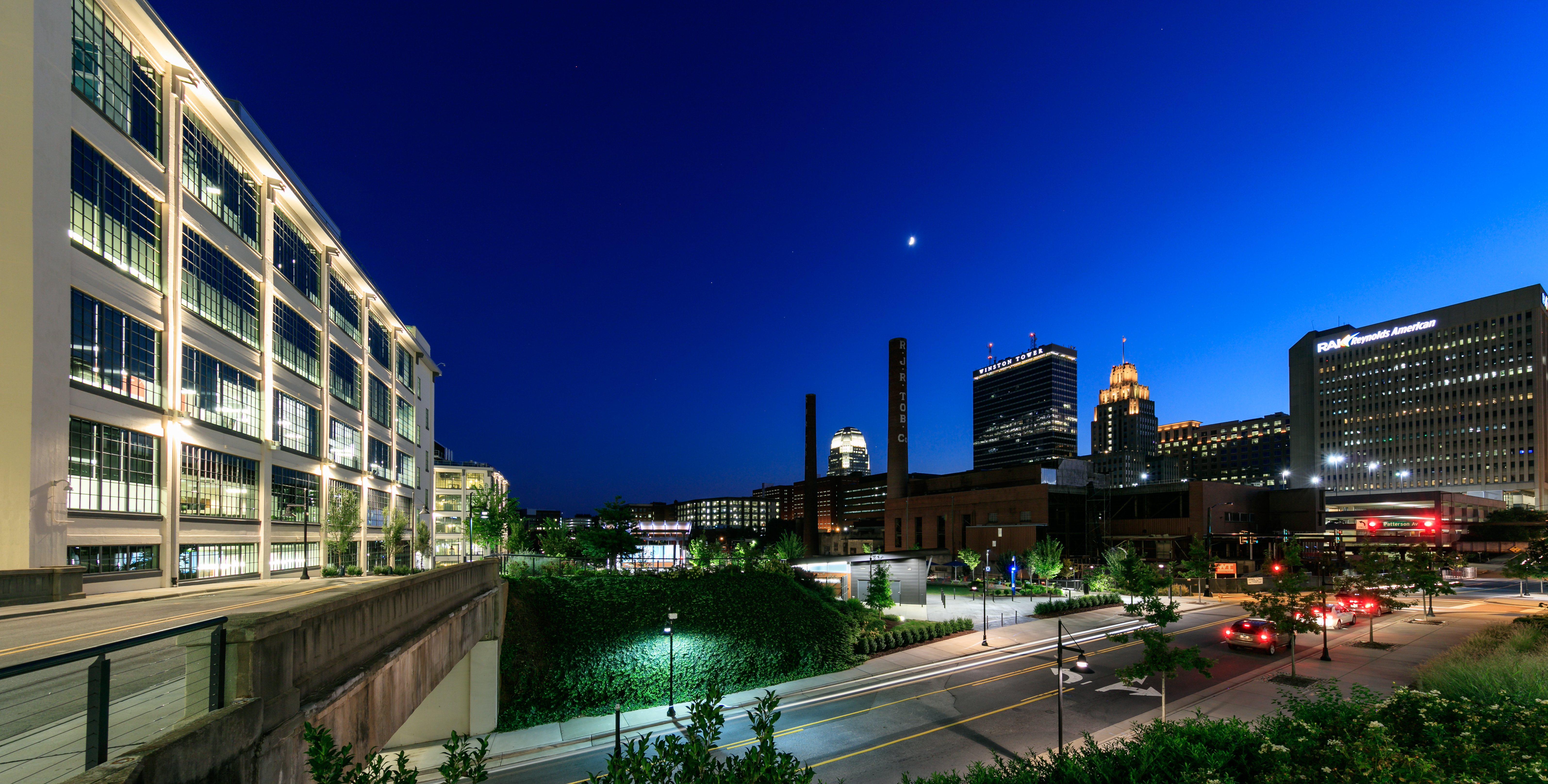 North Carolina’s fifth largest city is undergoing a reinvention, of sorts, from its roots in tobacco and textiles to an area where arts, dining and even sports are thriving and changing the way people live, play and work. 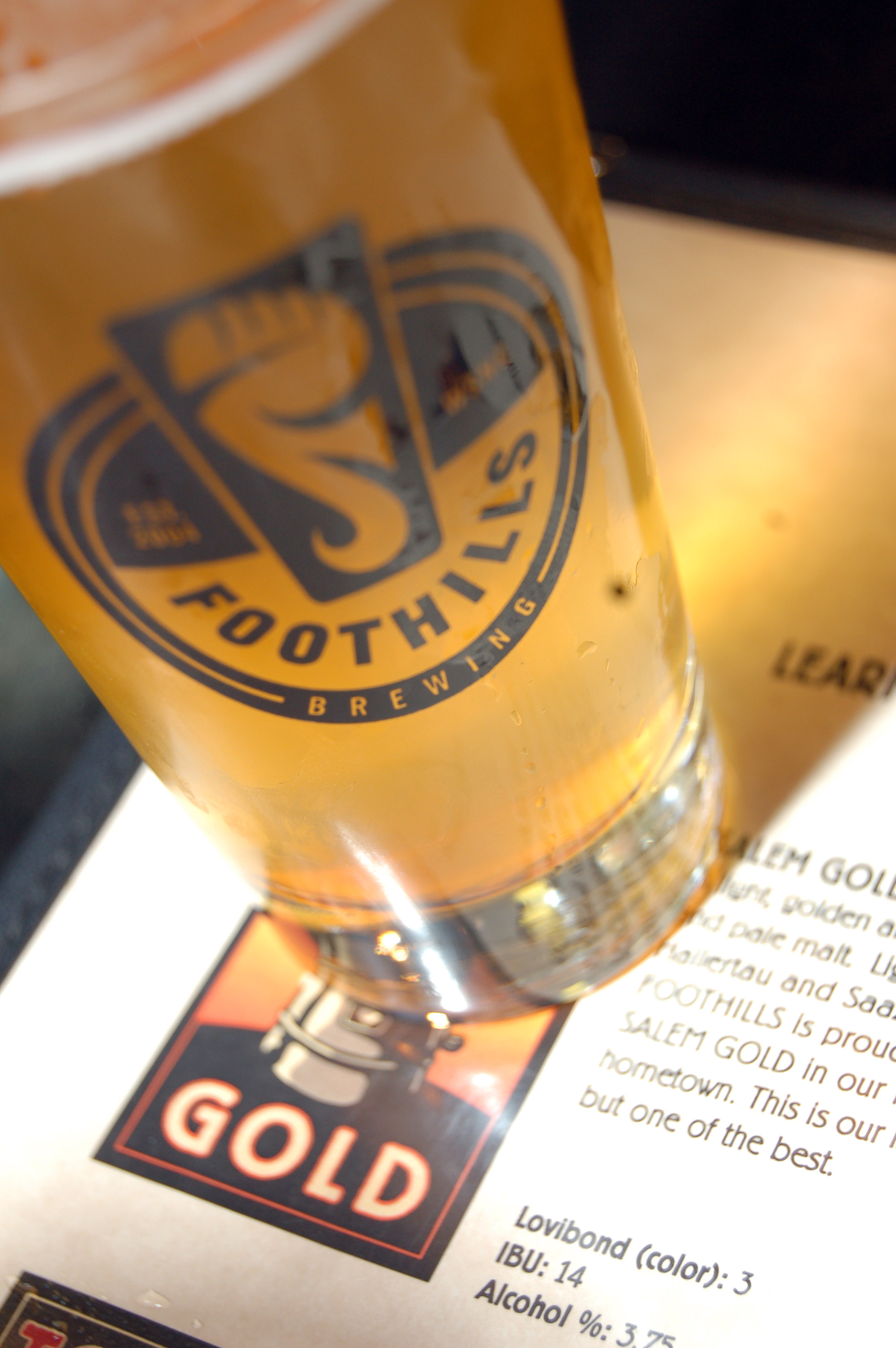 On a summer trip as a guest of Visit Winston-Salem along with other journalists, our group checked in to the Marriott Hotel Downtown before heading to Foothills Brewing Pub, the largest craft brewery in Winston-Salem. In addition to offering a wide variety of craft beers, Foothills is also one of the city’s most popular restaurants offering a variety of pub grub. Foothills has space for private events and can accommodate up to 70, while its sister café, Footnote provides additional space for larger gatherings, according to Ray Goodrich, Foothills marketing. www.foothillsbrewing.com. 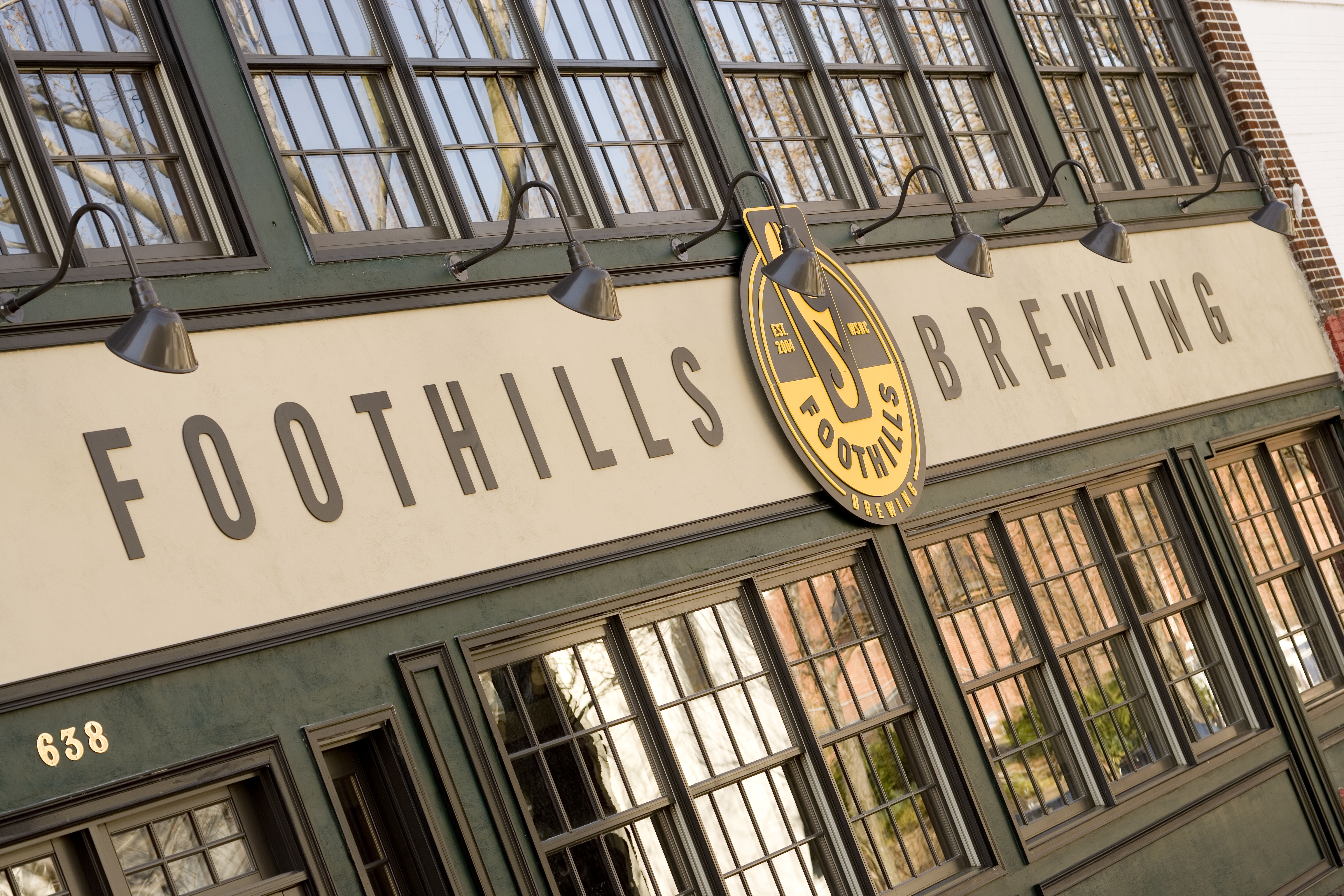 After a hearty meal and lively conversation, while sampling the craft beers, we ventured a short drive to Bowman Gray Stadium. The stadium is home to NASCAR’s first and longest running weekly track and features short track racing every Saturday night during the spring and summer. In the fall, the stadium is home to the Winston-Salem State University Rams football and track and field teams. 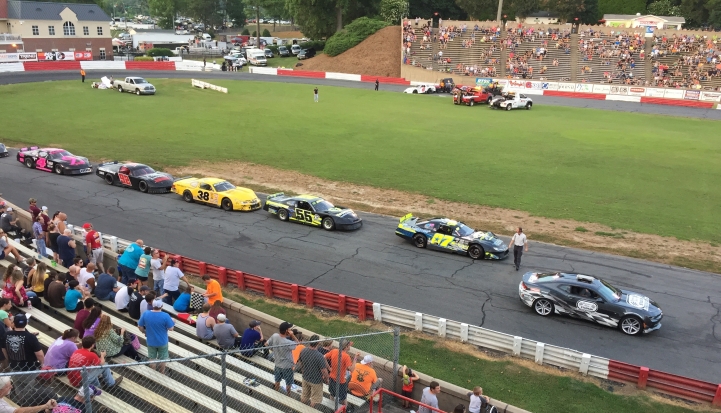 Bring earplugs and settle in for a good time while enjoying racing on this quarter-mile asphalt flat oval known to race fans as “The Madhouse.” Tickets are $10 for adults and $2 for children 6-11. Concessions are available but coolers for snacks are allowed. www.bowmangrayracing.com.

The next morning, we met for breakfast at Graze in the Marriott to fuel up for a big day of touring BB&T Sports Park where Jenn Ullrich, general manager, was overseeing a busy day of youth soccer tournaments. Ullrich said the park is used for local and tournament play for soccer, lacrosse, Ultimate and flag football. With 13 full-size soccer fields, 11 fields with lights, a stadium field with seating for 1,400 and parking for 1,200, the facility provides year-round sports fields. 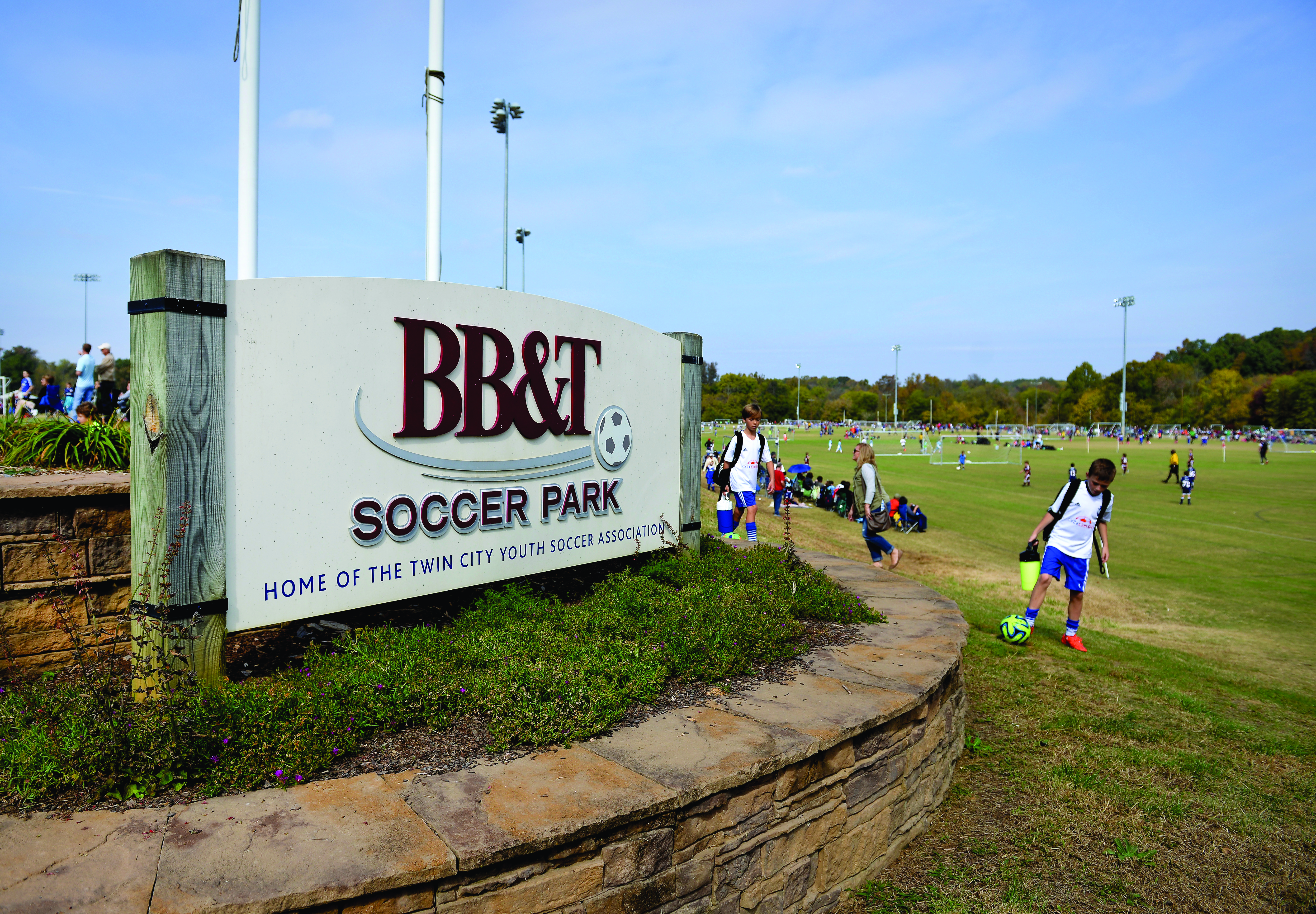 BB&T Soccer Park is also used for U.S. Soccer’s Development Academy and NFL FLAG Powered by USA Football for children 5-17.
In addition to sports fields, BB&T Sports Park has a field house with concessions, restrooms, a medical/athletic training room, team classrooms, a multi-purpose meeting room and wireless internet both indoors and out along with a large picnic shelter. 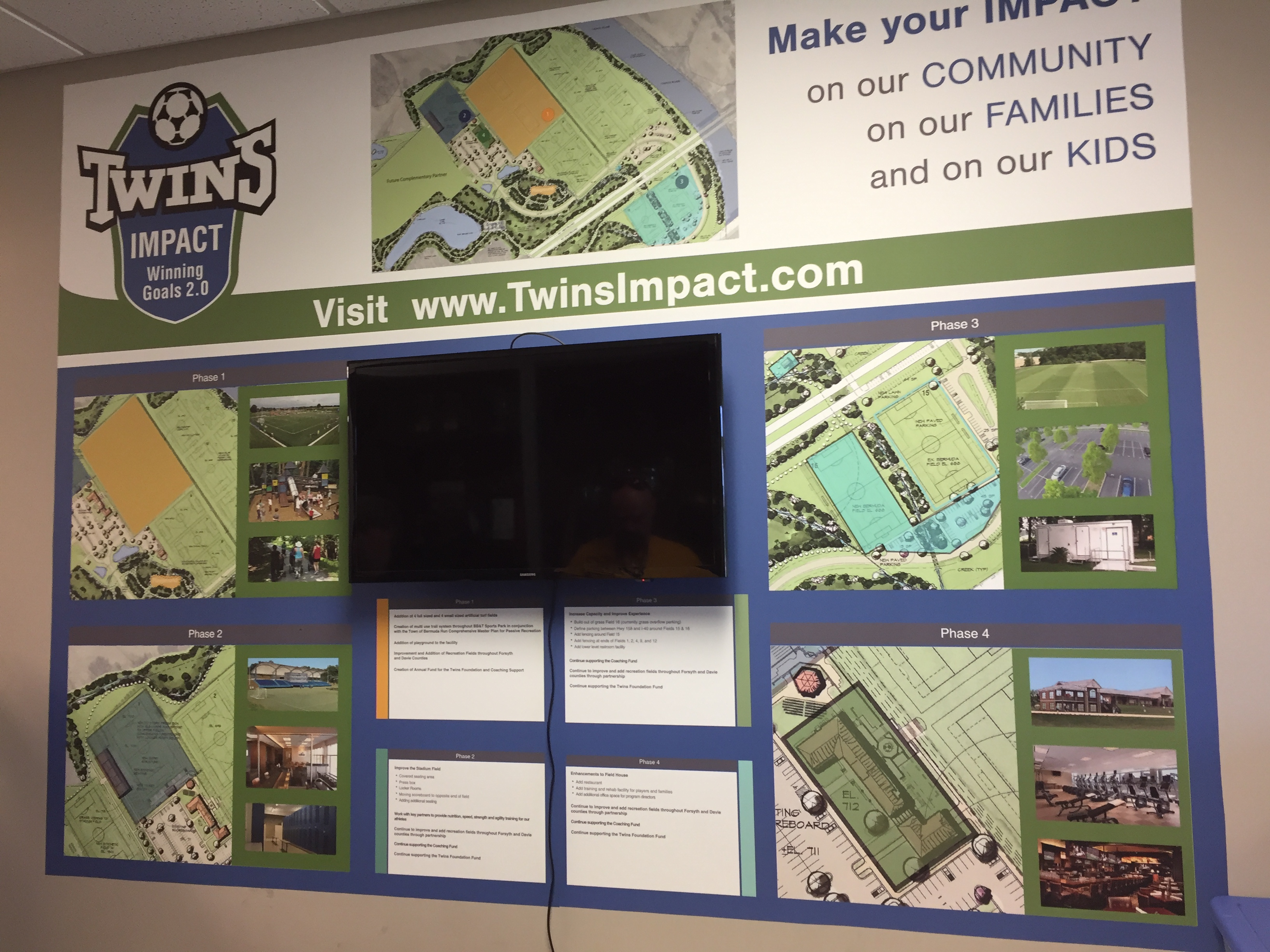 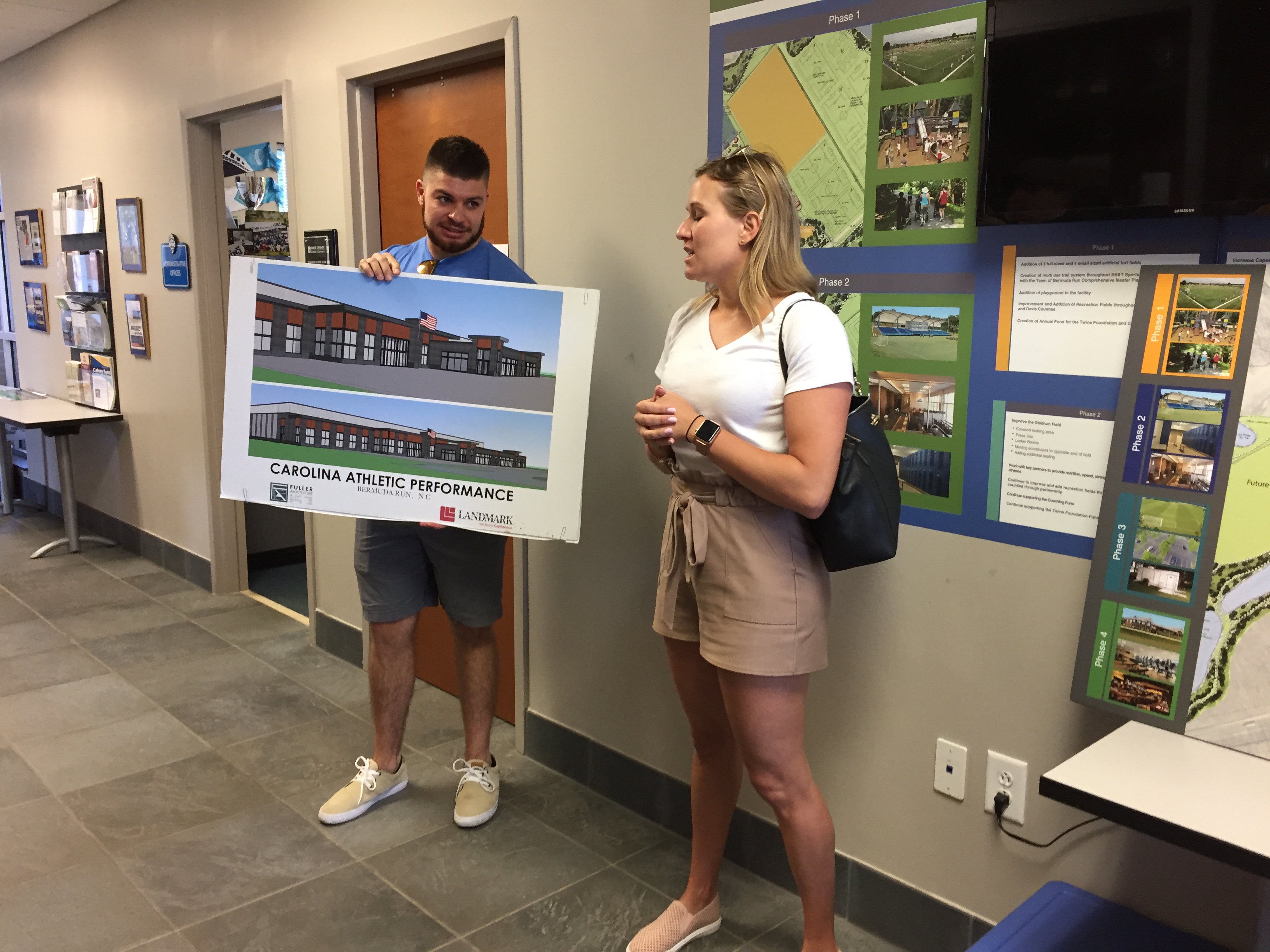 The new facility will include eight full-size basketball courts (16 volleyball courts), turf training fields, batting cages and seating for 2,500. Barber and her husband Adam own CAP and envision the facility attracting athletes and spectators on all levels for training, travel teams and activities. The Barbers also own Torque Performance and Fitness, an athlete performance and training center in Advance, N.C. www.torquepf.com. 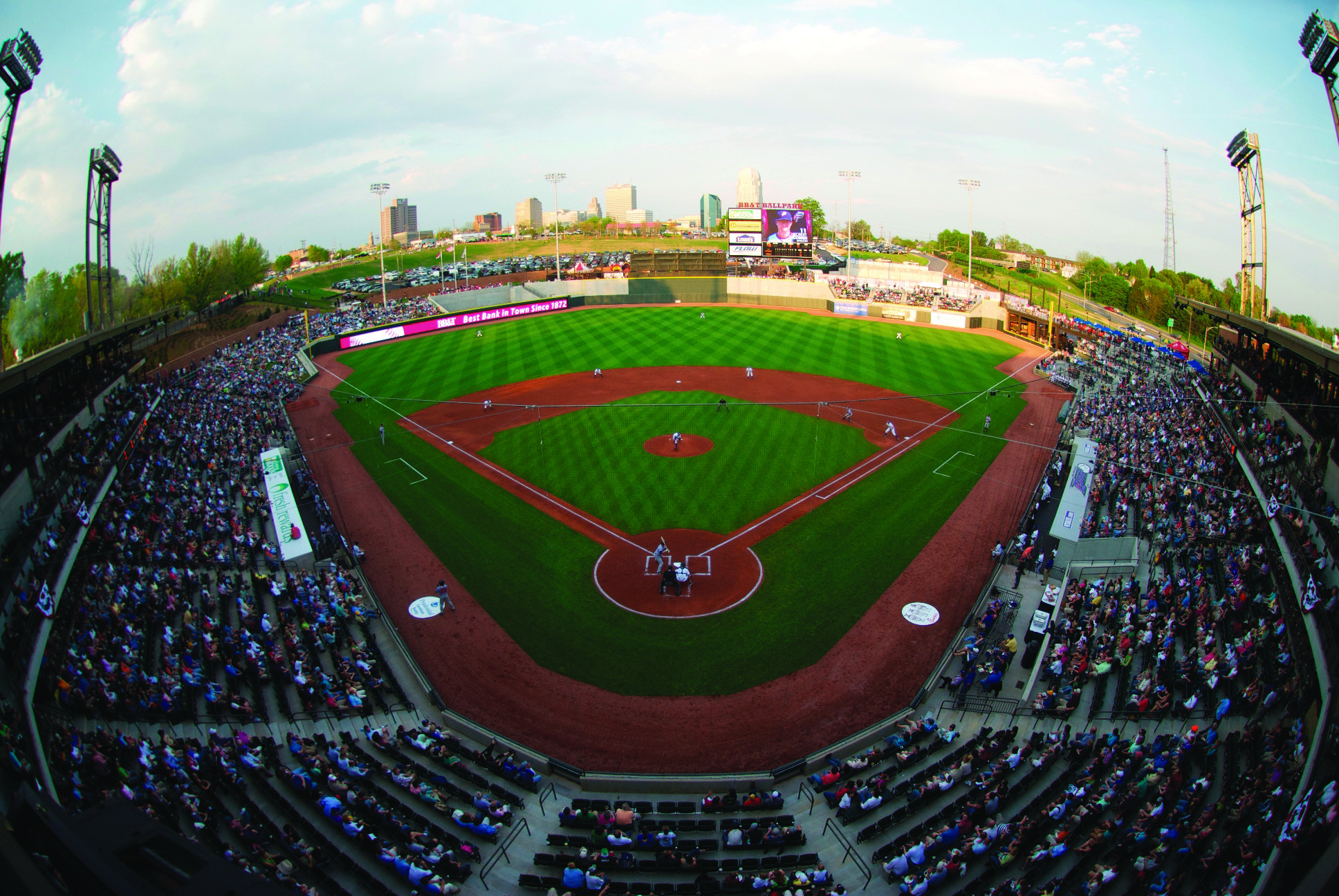 A short drive back downtown, the Winston-Salem Dash, a Class-A Advanced minor league affiliate of the Chicago White Sox was playing an afternoon game at BB&T Ballpark. With 5,500 stadium seats, 16 luxury suites, a state-of-the-art LED scoreboard and three concession stands, this ballpark offers skyline views of downtown and is in its ninth year. The upper deck is directly behind home plate and features open-air tables and dining. The concourse is lined with pictures of minor league baseball player plaques and information. The ballpark also includes a play area and a seating bowl in right field. Even though Down East defeated the Dash 11-1 the day we were there, a day at the ballpark is a good way to spend an afternoon. Paul Stephens, director of sales for BB&T Ballpark and the Dash said the ballpark is used for movie nights, community events and can be leased for functions. www.milb.com/winston-salem.

After the game, I ventured out downtown and discovered Mast General Store on North Trade Street. The retail store was formerly a hardware store and now carries iron skillets, outdoor gear, clothing, cookbooks and a huge selection of candies among other things. The original hardwood floors provide a welcoming creak with every step. Being in the Mast General Store is like stepping back in time and finding modern treasures. www.mastgeneralstore.com.

On the way back to the hotel, I found Small Batch Beer Co. a brewery that features handcrafted beers and cocktails. On this day, the small establishment was packed with locals cheering on their favorite soccer team while enjoying elevated pub food from Burger Batch. www.burgerbatch.com.

Our group met later and enjoyed dinner at Alma Mexicana owned by Claire Calvin. Calvin is one of 20 fellows selected for the 2018 James Beard Women’s Entrepreneurial Leadership Program. Calvin treated the group to a sampling of tapas and cocktails and discussed her other venture, Dinners on the Porch. If you stop by Alma Mexicana, enjoy the view of the Wake Forest Innovation Quarter while dining on the patio. Look for Alma Mexicana on Facebook @almamexicanaws. 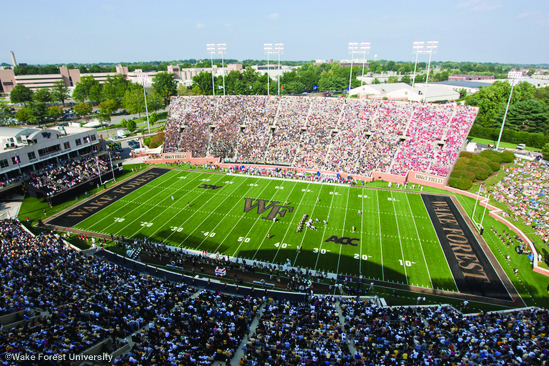 The next morning, we toured the Winston-Salem Fairgrounds Annex and Ice Rink with Robert Mulhearn, facilities and venue manager. The annex hosts wrestling, basketball, hockey, cheerleading, archery, concerts and more. The venue includes 30,000 square feet of space with arena seating for 3,500. http://wsfairgrounds.com

Our next stop was a tour of Wake Forest University’s athletic facilities. Pete Fisch, associate athletics director at Wake Forest provided the tour which included the seven-story McCreary Tower, the centerpiece of Wake Forests’ football stadium. The tower was built in 2008 and houses the University President boxes, luxury suites, club seats, media and coaching staff areas and a grill/bar, all overlooking the field.

Bridger Field House is home to the Wake Forest Sports Hall of Fame, the WFU Athletic Department, the Bill Barnes Sports Lounge, locker rooms, postgame interview rooms and stadium seating. The field house is situated on the left side of the stadium from McCreary Tower. 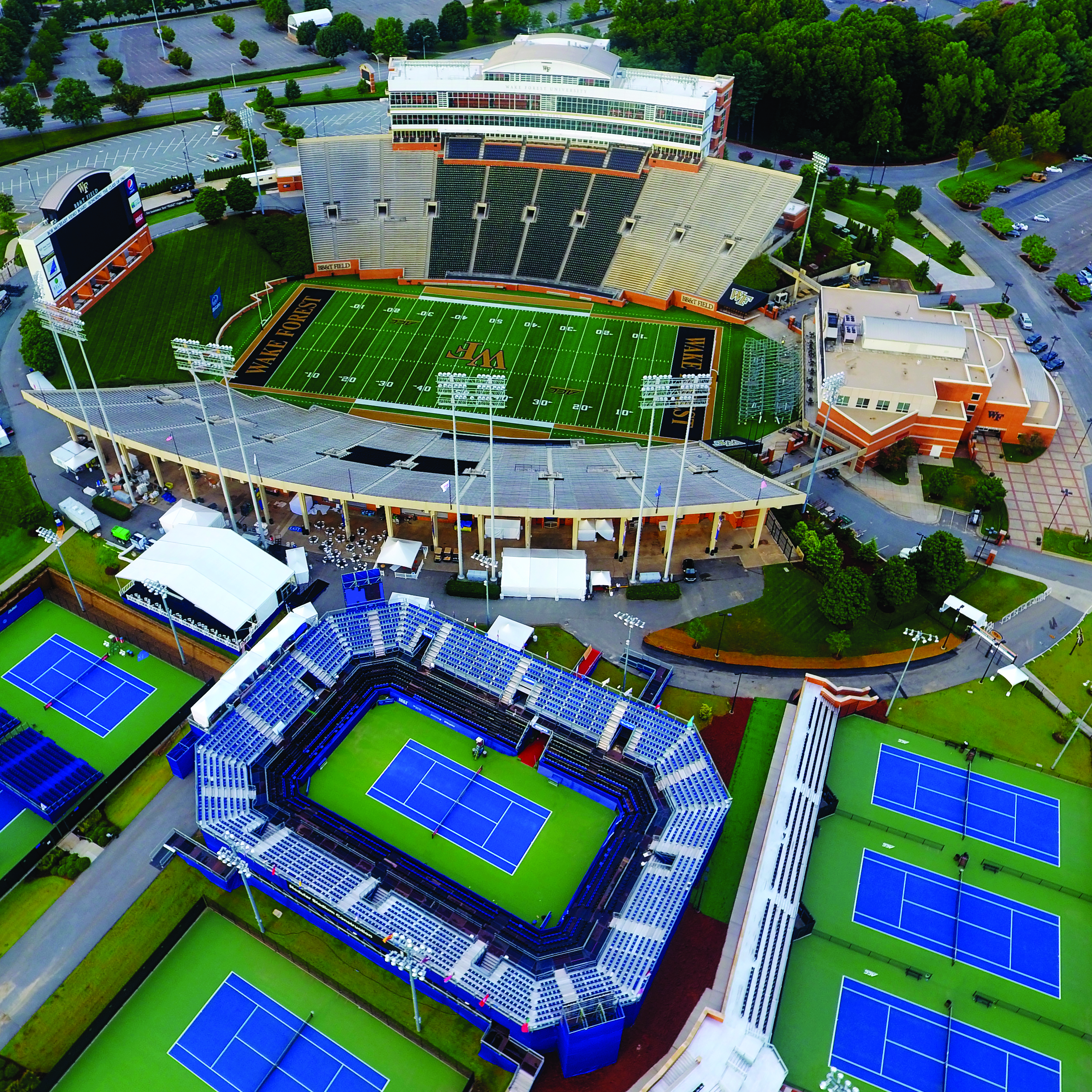 Just behind the stadium, the Wake Forest Tennis Center features 13 Deco-Turf II courts and the facility hosted the 2018 NCAA Division I Men’s and Women’s Tennis Championships. The center is also home to the ATP Winston-Salem Open. With both an outdoor tennis facility and indoor tennis center that includes eight courts, the tennis center provides a central location for Wake Forest tennis and attracts major events.

A short drive away on the Wake Forest campus, Kentner Stadium is home of the three-time national champion Wake Forest field hockey team and Demon Deacon men’s and women’s track and field teams. The facility can hold 4,000 spectators and includes a press box, upper-level viewing and an AstroTurf field hockey pitch.

Spry Soccer Stadium is also on the Wake Forest campus and is considered one of the top soccer facilities in the country. The natural grass field can accommodate 3,000 and the stadium includes two lit grass practice fields. Locker rooms, a press box, concession stands and a state-of-the-art scoreboard are also featured. www.wakeforestsports.com.

Craig Longhurst, JDL Fast Track manager said the facility includes two pole vault runways, two long/triple jump runways, one high jump apron and a throw area. JDL has hosted four national championships and is scheduled to host the 2021 NCAA Division III Men’s and Women’s Indoor Track Championships, according to Longhurst. JDL has a seating capacity of 1,700 and provides a state-of-the-art indoor track experience. JDL Fast Track opened in 2012 and includes a 100-meter warm-up rack, offices, meeting space and room for coaches or conference officials. In addition to NCAA championships, JDL is home to the Camel City Elite Races. These races started in 2013 as a way to show just how fast a 200-meter indoor track can be. Olympians and NCAA hopefuls can be spotted at this meet. In 2019, JDL is offering the largest prize of any indoor track meet in the country when the first place finisher will win $6,000. In all, more than $75,000 in prize money is up for grabs in the richest Camel City Elite. Commitments for the event include Matthew Centrowitz, Edward Cheserek and Paul Chelimo. www.jdlfasttrack.com. 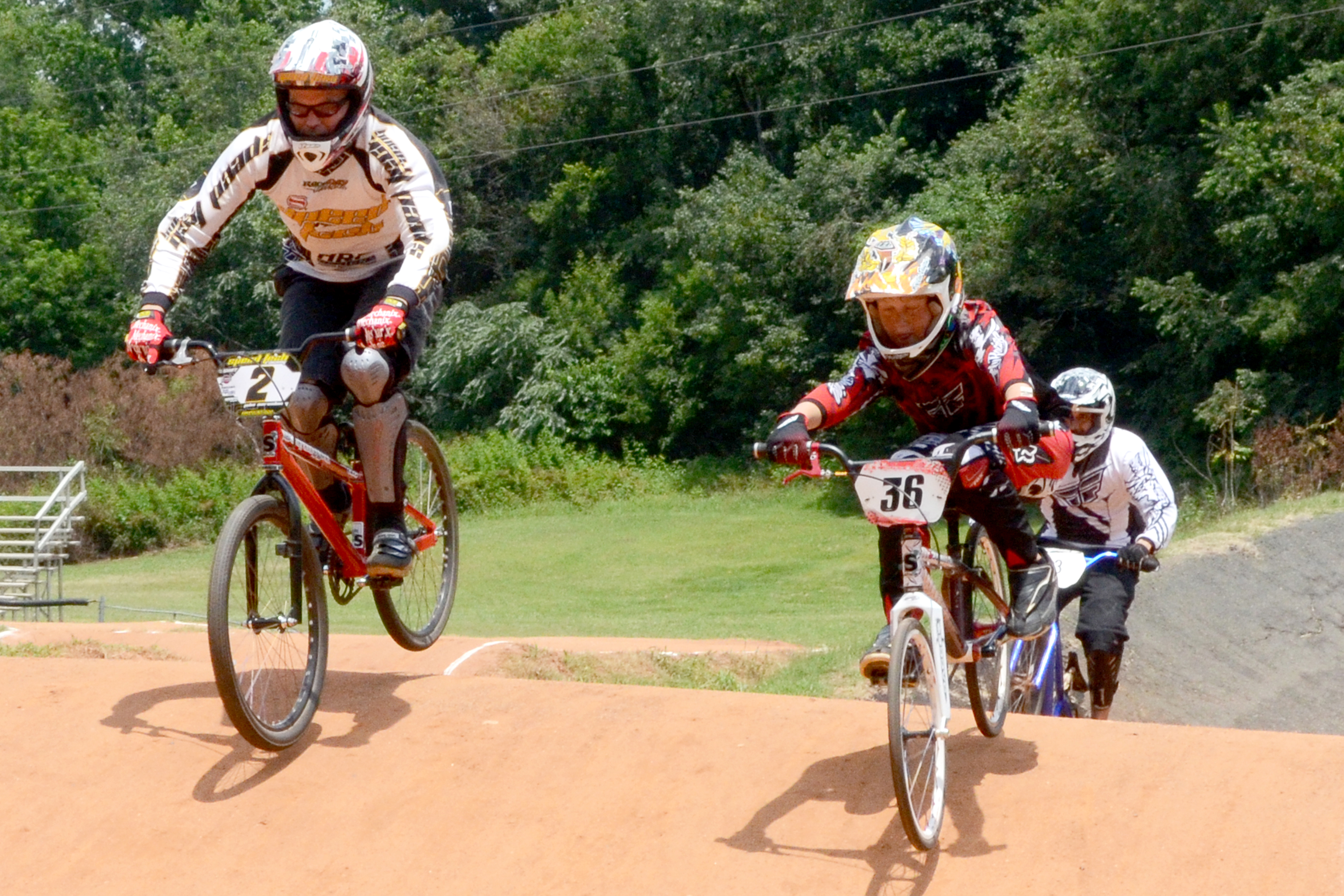 The final tour of the day was at Tanglewood Park, an 1,100-acre public park with two championship golf courses, horse stables, 10 lighted tennis courts, a BMX track, two stocked lakes, an aquatic center, a bed and breakfast and an RV campground.
Mike Wilcox, director of golf at Tanglewood discussed the renovations taking place at the Championship course, including reducing, repositioning and renovating all bunkers and converting the greens from bentgrass to Champion Bermuda grass. Tanglewood’s courses were designed by Robert Trent Jones, Sr., and both the Championship course and the Reynolds course are challenging.

The Championship course has hosted top golf events including the 1974 PGA Championship and the Champion’s Tour Vantage Championship.
Tanglewood Park is operated by Forsyth County Parks and Recreation. Renovations are expected to be complete this month, according to Alex Bennett, recreation manager.